Home of a Creative Kitty 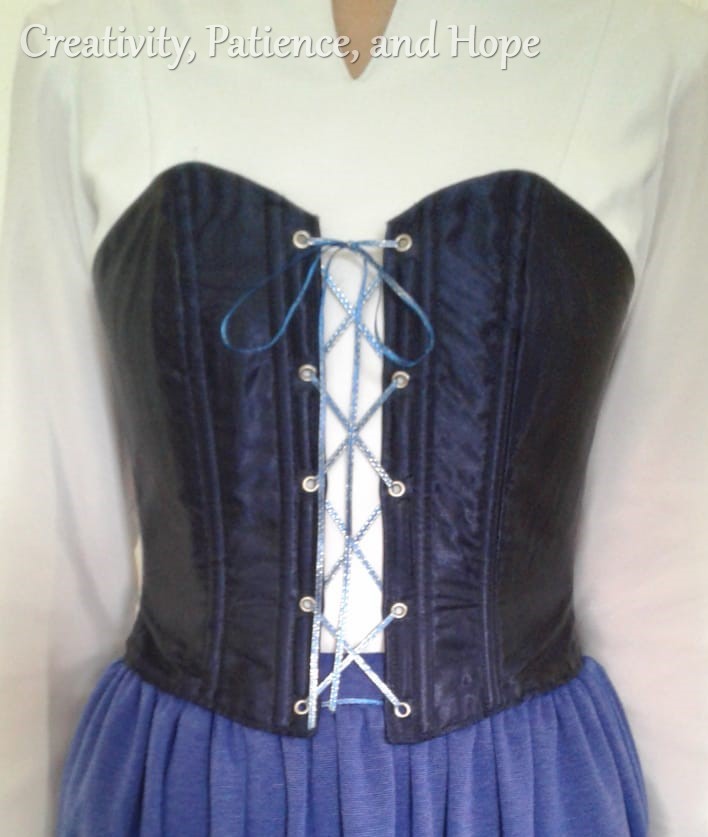 I love corsets. I love the way they look, especially over a dress or light blouse. Ever since learning to sew, a corset top was something that was on my list of things to make. After making my white fitted blouse that fit me so well, I decided to use the same pattern from PatternLab to make my first corset. At that time I didn’t actually know much about making corsets.

I had previously made an attempt at a corset for my sister which didn’t turn out very well. The sateen fabric stretched on the bias and became misshapen, and the “corset” didn’t lie flat when she wore it. There were a lot of wrinkles and unsightly gaping. I decided that for the next one I needed to give it a lining out of a strong, non-stretchy material in order to avoid that.

Using the pattern pieces for the fitted blouse, I marked them for the corset. I didn’t change the shape. I just marked the top and bottom where I wanted it to end. Since I planned to lace it up the front with a ribbon, I also marked a center front gap for that. I gave it a straight bottom edge and a sweetheart neckline.

First I cut my pieces out of navy blue sateen. I also cut lining pieces out of gabardine to stabilize it and avoid the stretching I had seen with my last attempt. In addition, I ironed fusible interfacing to the sateen for extra strength and stability. I sewed the outer pieces and the lining separately. Then, with right sides facing and the edges and the seams lined up, I sewed them together along the top and sides, leaving the bottom edge open. After that I turned it right side out. With the seams lined up, I topstitched along them to join them. Finally, I sewed the bottom closed.

Well! I thought I did a pretty good job here. The only thing missing was the grommets for the front. I marked for the grommets, very close to the edge. Then I poked holes and actually used scissors to cut them out. Yikes! I learned later that you’re not supposed to do that, since breaking the threads will start the fraying process. I did get fraying right away, and I thought Fray Check would solve that problem, but it really didn’t do much. Now it’s only a matter of time before it frays so much the grommets fall out. But anyway.

Now that my corset was finished, it was time to try it on. It would look perfect, or so I thought.

I loved the look of the outfit and the color combination. It was exactly what I had in mind. The corset itself, not so much. First, I think the shape of the corset was not ideal, and that was because the pattern was for a blouse, not a corset. Second, the corset didn’t fit properly. It didn’t stay up where it was supposed to, and instead it was constantly slipping and sliding. I had to keep adjusting it throughout the day while I wore it. Also, the whole thing was wrinkly instead of smooth, and it had that same unsightly gaping at the front. No amount of adjusting would fix that.

After that I did some research on corsets and discovered that they’re supposed to have boning. So I found some plastic boning at a local craft store, about 3/8″ wide. I stitched lines 3/8″ away from each seam to create channels for the boning, and I had to take out the bottom stitching near the seams. After cutting the boning to size, I slipped it in the channels between the outer and lining pieces.

I also discovered that the proper way to do the edges of the corset for the lacing is to have boning right next to the edge to stabilize it, as well as on the other side of the grommets. But since I had put the grommets in so close to the edge, there wasn’t room to put boning in. So the next best thing I could do was to insert little pieces of boning in between the grommets, and then one long piece beside them.

The boning certainly did a tremendous job of stabilizing the corset. It still wasn’t the best, but at least it didn’t wrinkle and gape anymore, and it wasn’t sliding down constantly. However, I’m not too fond of the way the top part stands up away from my body, and a lot of places still aren’t smooth. I think the back looks really nice, though.

I still love wearing this outfit, but now that I know a lot more, I think I’ll make a better corset to go with it. It goes well with the fitted white blouse I made before and a simple knit skirt that I also made. Later on I plan on making a tutorial for this skirt.

Well, that’s it for my first corset attempt. For my next corset I did things a lot differently from the beginning, and the results were amazing.